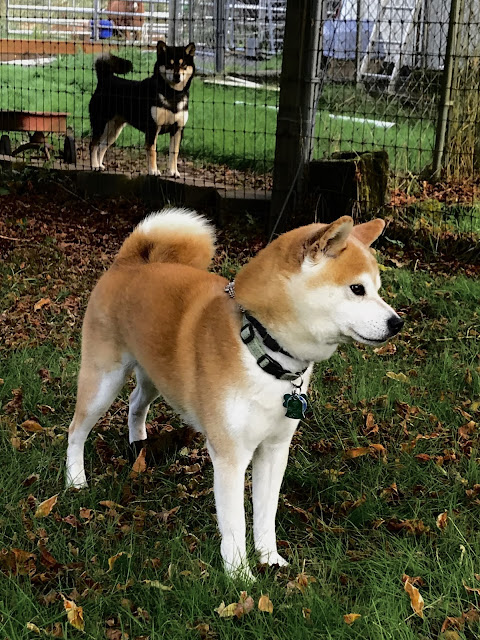 Posted by Cherifell at 9:31 AM No comments:

Holiday memories with dogs and their people

I want to tell about a wonderful memory of the holidays we had when we lived in California.

We used to have a haunted cemetery at my parents house every year and I considered that my very own birthday celebration. It came complete with the fog and lightning machines and all the other possible goodies and gadgets from the current Halloween technology of the time. I had painted a castle structure to surround for the porch and a big sign for the opening of the cemetery complete with a lounging skeleton on the top that said " The Fellinger's Very Scary Cemetery." It was way cool.

All my available friends would come over all dressed up to "work the grave yard." We'd have snacks and drank adult punch (tee hee) and could chat to catch up while I did their zombie makeup and everyone got into character. Tina would stir the giant bubbling kettle dressed like a witch. Joy would pop out of the coffin and I would draw attention on the street and guide passers by through the maze of tombstones. We have several zombies, a devil and even more ghosts hiding amount the tombstones. My friends all knew they couldn't do anything more wonderful for my birthday then making these memories every year as it's my favorite day of the year.....Halloween.

My parents got a kick out of counting the trick or treaters and families that came from other neighborhoods. One year 650! Every year my parents would say they had to buy more and more candy but I could tell they really loved it. We did that for about 10 years. After Marcel and I moved to WA my parents said people would come to the door and asked what happened. My nephews tried to carry on but they didn't quite have the finesse it took to be just scary enough NOT to scare the little ones.

My obedience school students had a doggie costume contest and many of them helped put on a dog & owner Halloween costume contest at the Pleasant Hill October Fest celebration to raise money for local animal charities and we had a decorated graveyard backdrop for $5 photos.

For Christmas we had dress up again at dog school and we also put on pictures with Santa at any pet related store that would have us. Marcel got peed on a lot. That's pretty funny.

We also went in several parades each year. You've probably read my earlier posts about how we met our first Shiba. If you look closely at the picture below you will see Marcel in the middle with Spencer the Poodle and Kiko the first Shiba we ever met and who inspired us to get our own Shiba. Kiko was a dog training project since 3 other trainers had deemed her emotionally "unreachable' and "untrainable." Sheesh. She turned out great under our tutelage and her owner added Spencer to the family. We were their pet sitters and they joined us in adventures until we moved to WA.

Funny story.....Liz and Lola (the dog) who went to my dog school became best friends of ours and since Liz lived several cities away she would bring Lola to the house before work then come get her before we left for dog school. She said she wondered what we did all day. One day she got of work early and snuck up to the house and peering through the screen door she saw Taboo and Lola sitting next to my sewing machine, each with bunny ears on their heads! BUSTED! We still laugh about that.

Marcel's mom worked at a convalescent facility as a nurse her entire carrier and Marcel and I went there for a few house every holiday because we figured it was the most lonely time for those who didn't have family or who's family did not come visit or take them home for the holidays. We started a group of interested students in joining us. We did visitations to 3 local facilities and started our own chapter of therapy dogs.

We got to know several of the full time residence at the facility mom worked at because we picked her up every day after work. Sometimes we would go in to say hi if we arrived before mom got off duty. Mom said the elderly folks really liked seeing young people and we brightened up the place. Sometimes we would bring little things for people to enjoy like flowers or pictures to hang in the communal areas.

One young resident had been brain damaged by gun fire in a robbery. When we would stop in to see how his day was going he would always say "it's a good day to be alive" with a big smile. He really enjoyed our Rottweiler Taboo. That nice young man passed away from complications of his injury eventually. One day we went to pick up mom and she said he had passed.

Another permanent resident was a dedicated & decorated veteran. We really enjoyed talking to him because he had spent time in Japan and he knew what our Shiba Inu was as soon as he saw her and told us about the different Shibas and other Japanese breeds he'd met while stationed there. He talked through a machine that looked like a tiny laptop computer. I can't remember exactly why he had lost the ability to speak, maybe throat cancer but we had to be patient while he typed. He was a very intelligent and charming man.

Our dogs had a lot of different costumes we would put on them when we'd go visiting. Taboo pulled a cart that we could put decorations in. She had a sleigh, an Easter basket, a Conestoga chuck wagon and an American flag covered wagon she'd wear with her uncle Sam hat and cap for 4th of July. Taboo was not good with other people and I could never leave her alone in the house with anyone (even Marcel for a while) but the two things she loved were obedience shows and pully that cart. Her face would light up and her little nubby tail just wiggled. She was always good when I was present but I think she just enjoyed frightening people. It was just her personality and she got a kick out of it. Nobody else did though.

Every animal you meet or own will teach you something new if you just pay attention to them. It can be hard to see them as teachers when they are being naughty but as I think back to all our pets that have passed and all the people and their animals I've met during my training career it has been a fantastic life and quite the education. Enjoy these pictures I know I did looking at them again. 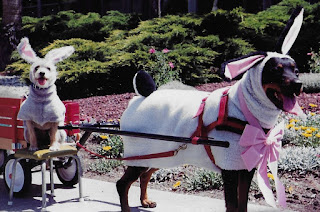 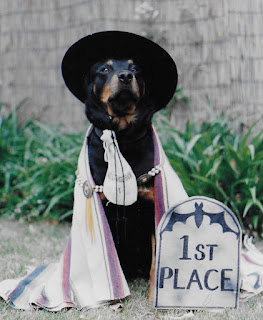 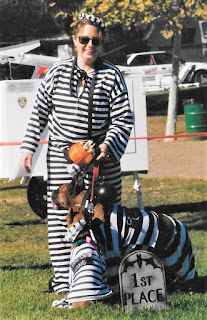 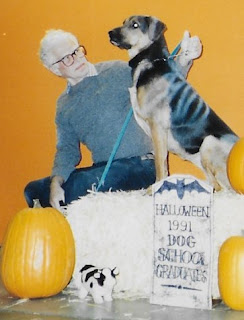 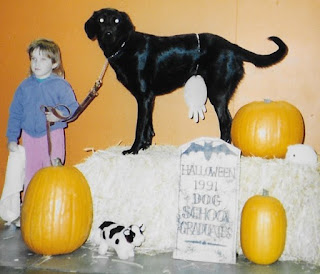 Posted by Cherifell at 9:55 AM No comments: