I am NOT photogenic!

Once again I find myself paying for those awful dog show win pictures of me with a triple chin!  My attempt to capture the joy of a good win with one of my precious dogs is such a let down when I open the anticipated photo package in my car at the post office and I see myself.  ARGH!  Not only that, they are expensive to boot. 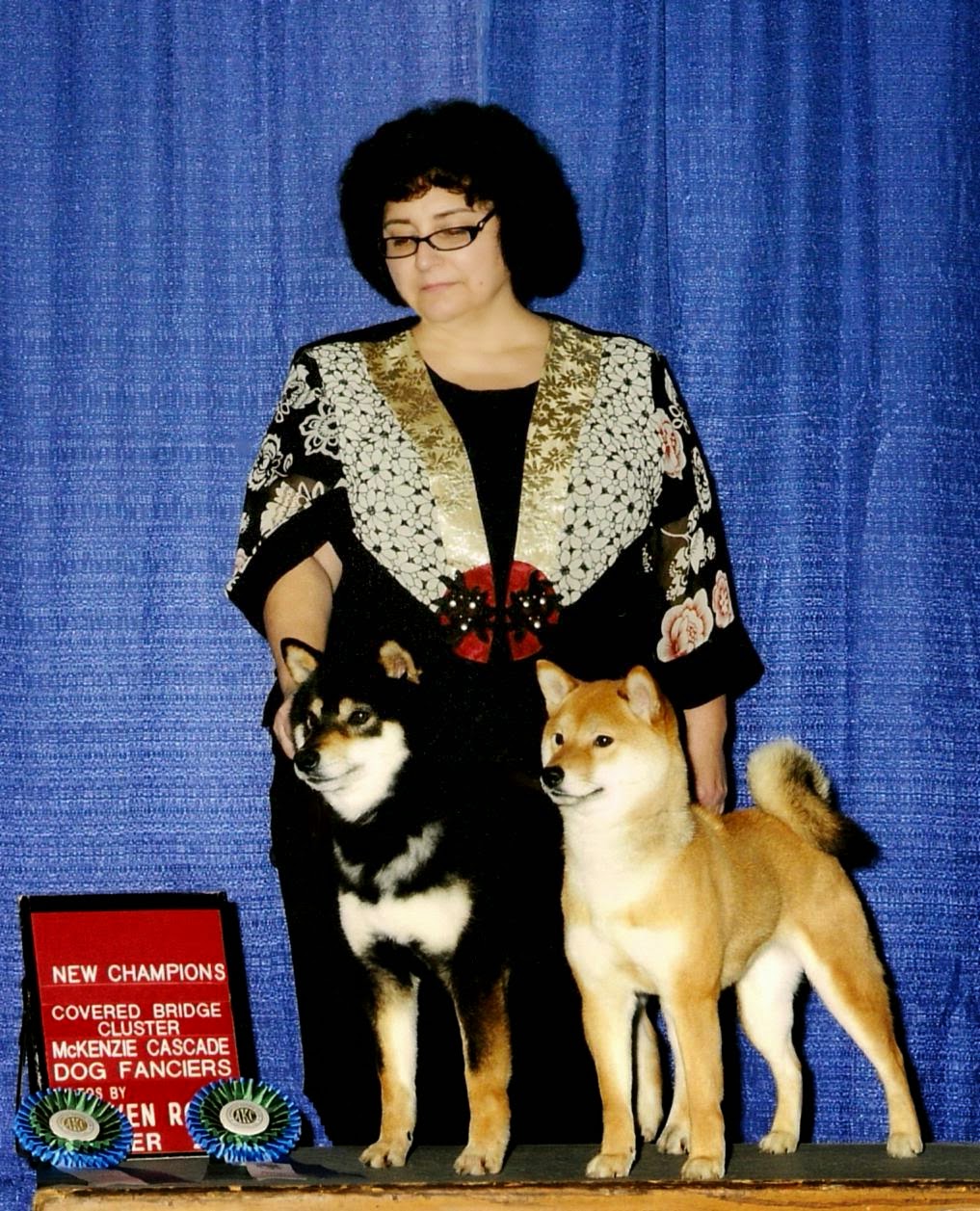 Jan asked me to go horseback riding out at her place a week ago.  I said OK, I'll go.  The barn owner Susan has a horse I can ride and I said fine as long as I can use my own saddle and reins I'm good to go.  I just told her someone might have to help lift my leg over because I'm so decrepit.  Jan later told me she thought I would pussy out of going for sure.  The rain and 40 degrees that feels like 31 degrees did kinda make me question if I was right in my mind. Marcel didn't want me to go, I could tell but I made promise to myself to start being more active.  I've been going to dog school week nights and spending a lot of time outside.  The snow and frozen pipes might  have had something to do with that but that's a different story.

My mount is Amber.  A Tennessee Walker that is the color a Clydesdale.  Now I wanted a short horse like I have at home but Susan says Amber is a good calm  horse.  I haven't had good experiences with the TWH.  I got taken on an unwanted gallop with a TWH that was insanely out of control.  But Amber was very sweet and gentle and a fantastic ride.

We only walked but they don't call them Walkers for nothing.  They just plow through anything! And they walk REALLY fast and REALLY smooth.  I would have had a lot of trouble with my little horse Stetson keeping up with them.  I have no doubt he would try but he would have been exhausted.  Amber was slipping and sliding in the mud and rocks but was just a smooth as could be.  In fact, if she were for sale, I think I'd have to consider her.  Even though Jan did have to push my leg back over Amber's butt so I could get off.  I need a 14.2 TWH.

Anyway I had a great time.  I got cold, wet and muddy but it was really fun but I'm tired. So tired I can't sleep tired.
Posted by Cherifell at 5:36 AM No comments:

Email ThisBlogThis!Share to TwitterShare to FacebookShare to Pinterest
OMG!  I finally finished Kurotaka!  It only took 3.5 years!  The only reason it took so long is that he is black & tan.  If he were red he would have finished easily.  He shows beautifully and his coat is gorgeous.  He smiles for the judge and wags his tail.  You can't ask for a better performance he just begs for the win.

Fuyu finished the same weekend.  For some reason I'm not as excited about her win as Kuro's but then she was a piece of cake, taking points consistently each weekend I took her out to a show.

That's probably not as interesting to readers as what happened while I was showing.  I took 4 dogs to the show by myself.  I now know that is way too much for me.  I had 3 of my own and my friend Jan's dog.  So I had two dogs, both in the same class and 2 girl in different classes.  I had prearranged some help from a nice woman and her son who show Dachshunds.

I always have some bizarre thing happen to me.  I don't mean to draw attention to myself but it always works out that way.

So....we know I have a bad back, bad knee and I've been suffering terribly with hot flashes for the last couple of years. If I move I will sweat and it ain't pretty.  I use a lot of things to keep myself cool.  Drinking cold water, fanning myself, putting small ice packs on my chest and back to cool my core. At the last show I was wearing sleeveless blouses when other women were wearing down parkas.

The first day the 12 year old boy was available to help me.  It was a mess.  I don't know who was jumpier, the boy or the Shibas.  Fuyu was totally upset with the situation which was weird because she usually shows for anybody but they just didn't hit it off.  But I took her back in myself for the second go round of winning females from all the classes and she won and took the point.

The second day I decided to put an ice pack in the small of my back right at my pants waste band.  It worked wonderfully!  It kept my core cool and I didn't get all worked up and sweaty.  I didn't win much the second day for some reason. Little bits of the gel from the ice pack leaked out of a hole and got left behind in my undies.  I look down to see some on Taka's head!  HA! But the judge told me I was a memorable competitor, which was nice.....I think.  Then I looked up and saw that the boy had the wrong armband and wrong dog in the ring!  YIKES!  They had already been examined on the table!  I told the ring steward who told the judge and she was kind enough to let us switch dogs.  It was a mess but I was keepin' it cool with my ice pack down my pants!

Third day.  We showed at 8am so I had rushed to potty the dogs and they were on strike by now.  Nobody would poo.  I had to hurry and get to ringside.  The boy was there with his sister now, holding my girls while I showed boys.  Boys go first.  I'm ringside, ready, sweating today, ice pack or no ice pack. Kuro is acting weird.  His tongue is spooned, he's panting and looking toward the exit.  Damn........he has to poo!  But we're in next!  I can't leave the building now.  Shoot.  This is what a good dog Kuro is.  He takes a dump right there.  I'm like "GOOD BOY!" They call our class but I'm still picking up the huge pile of poo!  I say "I'll be right there, cleaning up!" I dumped the poo in the trash and in the ring we went.  I'm thinking great, Kuro is happily empty and paying attention to me now.  My pants must have stretched out since yesterday because I'm suddenly having a hard time keeping the ice pack in place.  We get sent around the big ring and oh no!  The ice pack slips down into my pants!  It's not in my undies so it start heading toward going down a pant leg!  OH MAN!  I stuck my hand down the back of my pants to save it WHILE STILL RUNNING AROUND THE RING!  The judge shakes his head and covers his eyes.  I dig that ice pack out and put it on the table at the front of the ring.  The judge then gives me the blue and my dog has won the last major he needed to finish his championship.  My lucky ice pack!  YES!  Both the girls poo'd outside the ring and the kids had to pick it up.  I felt bad for them but all my dogs were not empty, which is always a good thing.

The fourth day I'm looking forward to going home. We have that darned 8am ring time again and I plan to be heading home by 10 for sure.  I'm sweating away and flustered.  I even left one dog out of the competition because I didn't think he was entered on Monday and by the time I found out he was I didn't have time to get him out of the car.  Bummer.   Today the mother, Michelle bless her big heart is helping me because the kids are somewhere showing in obedience.  Things go smoother with Michelle and Kuro wins again and Fuyu gets the last point she needed to finish her championship!  Hopefully I won't be making a stupid face in the pictures.

So that's my story for today.  All and all it was a successful weekend finishing 2 dogs.  But I'll tell you what,  I don't think I'll be showing 4 dogs again for a while.  It took me several days of sleep to recover from the running around in circles to the left and all the loading and unloading of the dog cart.


Posted by Cherifell at 5:19 AM No comments: