I'm so excited!  Handsome leaves for training TOMORROW!  yEEEEEE Haaaaaaaa!  I can't wait to ride him.  Even though I suffer from fibromyalgia and have a busted up back from a car accident I can still ride.  I use a mounting block so I don't have to use my own strength to pull myself up  then someone helps flip my leg over the back.  Once I'm up there I'm OK.  It's just getting up in the saddle that is hard.  Of course I pay dearly for days after but it is so worth it when you love something so much.  Like washing and packing dogs to the shows.  Marcel does a lot of the work now but I still want to go!

OK, so I found out some information about Handsome from Patti at the BLM.  She said he was captured 11/24/1999 in Nevada outside of the herd management area but she doesn't know which herd management area.  He was adopted 8 months later.  So he is 4-5 years older than I thought, maybe being 15 years old!  Damn, hope Jona can teach and old horse some new tricks like how to respect me!

Marcel is hooking up the trailer as I write.  Tomorrow is superbowl or STUPIDbowl as I call it so at least I know Marcel will be motivated to get the transport done early.  I'll let you know how that goes.

Lexi is getting fat and we've found wonderful homes for all her puppies.  I will have her x-rayed in a week to see how many pups she'll have and the vet will let me know when she projects she will deliver.  Babies are always so exciting and fun.

Got to go finish cleaning my rat cage now!
Posted by Cherifell at 2:53 PM No comments:

Happy New Year and all that rot!

Time really does fly and it's been a long time since I wrote myself anything.  I want to say a lot has happened but I can't remember!  I'm in a perpetual fibro-men-o-paws kinda fog.
First I have to say I'm freaking happy the holidays are over.  I'm really beginning to hate holidays.  We don't see friends or family anymore and they are just annoying days I can't wait till they pass and we can get back to normal.  Plus the dreary late fall through winter non stop flippin rain making my old bones ache and all those chores to do in the mud.
The latest and greatest is that Bridget Jones finally finished her AKC Championship.  I was afraid it would never happen.  Here's the photo.  It was a really good weekend for us.  Bridget was the winner's female and best of opposite sex on Saturday and the black & tan male I'm showing, Zorro, was reserve winning male.  On Sunday both Bridget and Zorro were reserve female and reserve male to a major so that was great!  It's always so much fun when you can win!  The next two times I showed any dogs we got completely dumped out of the competition.  I still had a fun time at the show because I brought a friend who had never been to an AKC show so I got to be like an announcer delivering the blow by blow accounts to my captive audience of one.  I tried to be quiet and not annoy those around us by sharing my own opinion of controversial topics. 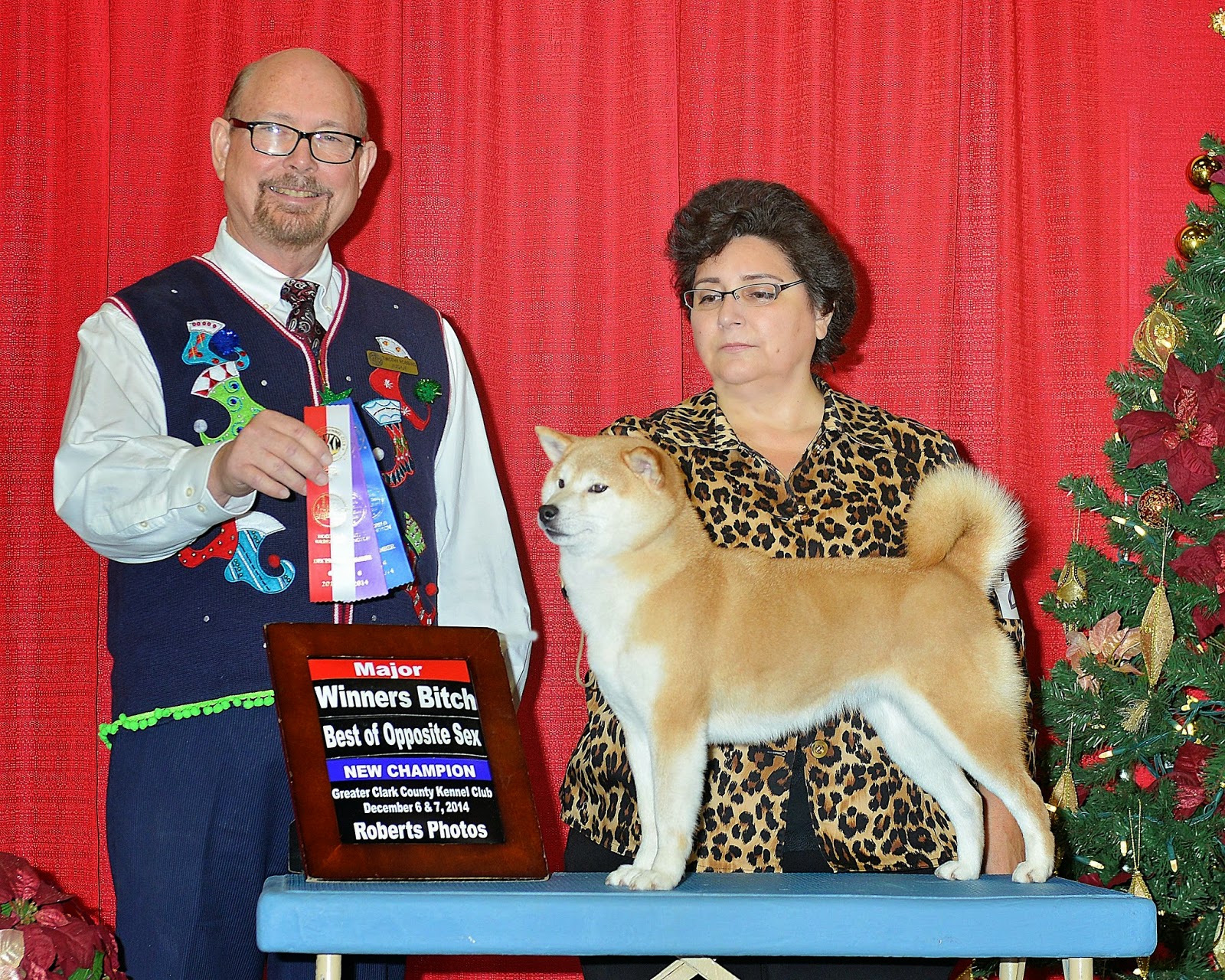 Let's see.....oh, Stetson my horse had to be put down.  He had equine motor neuron disease which is like Lou Gehrig's disease.  Remember I posted he had lost 100 pounds, we thought it was his feet because he was shifting his weight from side to side on his hind end?  Still,  it was very hard to let him go.  My large animal veterinarian had passed away a while back and I hadn't found anyone else to be my regular vet so I used the vet the gal that owned Stetson before me used for him.  She ended up being a flake.  She said Stetson had a "classic case of founder" to her trainee. Founder can be very serious.  It's basically when the outside of a horses hoof comes off.  I know!  Ew gross! I wasn't 100% on board with that diagnosis for several reasons I need not go into for my non-horse owning readers.  Marcel didn't believe it to be the case either so we hit the computer and almost simultaneously came to the same diagnosis of EMND.  We took Stetson to OSU veterinary teaching clinic and they confirmed the diagnosis we provided and then CALLED THE USELESS VET to tell her she was wrong with all the nasty notes she wrote about me "refusing to do hoof films" after she told me they were not necessary because she would treat and medicate him the same way with or without films.  WHATABITCH! She just wanted to be right so bad.  It irritated me the being right was more important to her then the health of my horse.  If we hadn't felt that her diagnosis wasn't incorrect we would have spent a ton of money following her protocol for recovery on a dying horse PROLONGING HIS MISERY.
I have a new horse I named Handsome Stranger.........just because I wanted to.  He is a sexy red dun Spanish mustang.  I hope he will like western dressage training because that's what I have in store for him.  He was given to me by a woman in CA.  She adopted him from the Bureau of Land Management, better known as the BLM, had him trained for a year then threw him out in the pasture and never rode him for 3 years and then I got him.  He is a spoiled beastie who doesn't respect the space of little women that's for sure but I have faith Jona will get him back on track.  I was going to say whip him into shape but that doesn't sound right when you are talking about educating a horse. 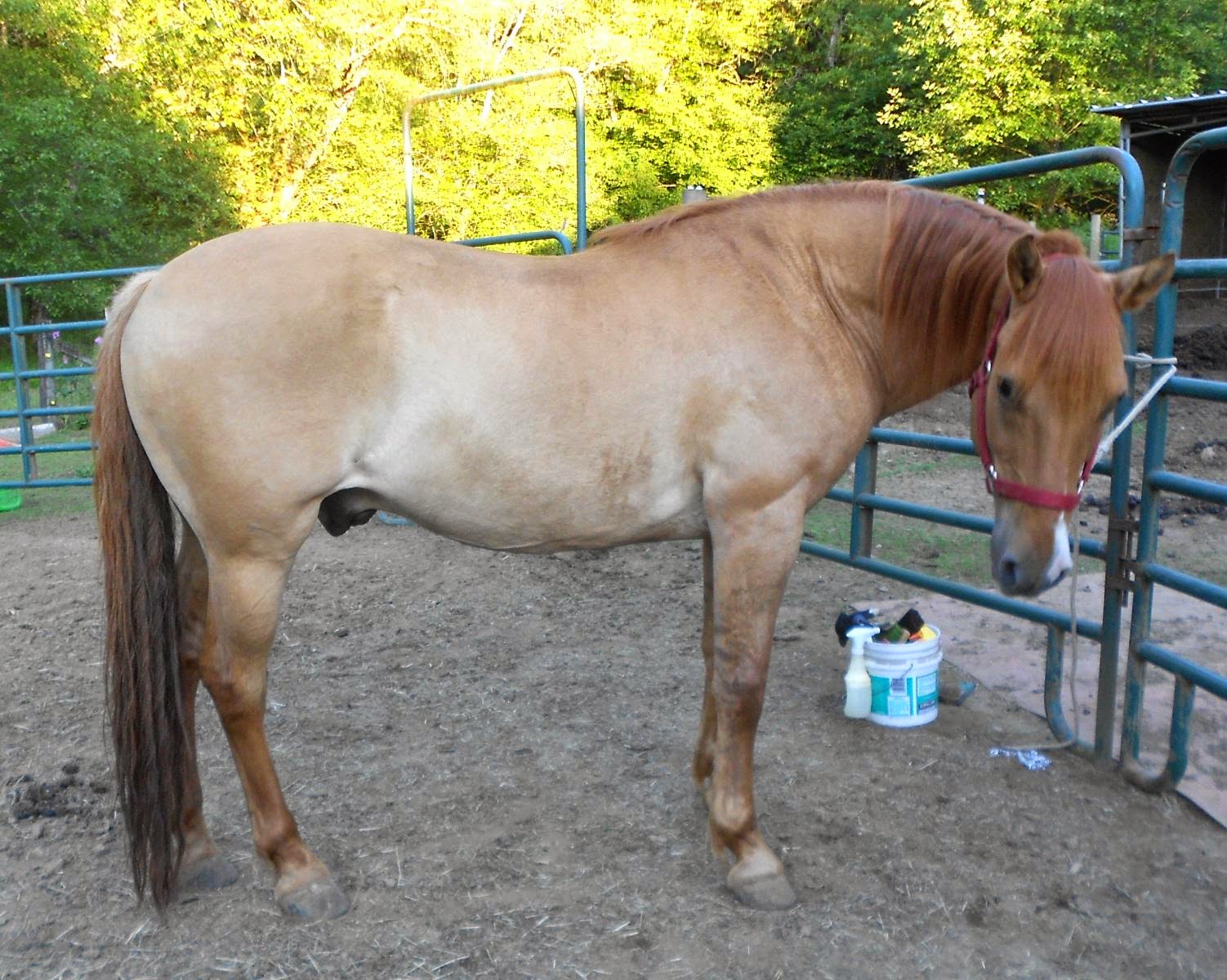 Marcel and I took the horses to a weekend clinic.  I thought it was fun.  I had already saddled Handsome several times and worked him in the pen from the ground and he knew the commands for the walk, trot, canter and whoa very well.  I wouldn't have thought twice about climbing on up except I really wanted someone there with me just in case but I assumed I could do a walk/trot without getting him too excited like he might get at a canter and get bucked off.  But Jona didn't think he was trustworthy.  Handsome is going to training with Jona soon and I hope I get an awesome horse back.
Lexi is expecting puppies sired by Kurotaka so that is exciting.  I have plans to breed my 2 year old girls Fuyu and Taka too as soon as I get their health clearances done.  I have to take some time and research potential sires for the litters.  That is always interesting.  There are so many people with show quality Shibas I haven't met yet.  I tend to stay out of the politics and gossiping and nastiness associated with show folks.  There are some nice folks and there are some not so nice folks. In Shibas I found there are a lot of breeders who say "if you're friends with so-n-so I can't be your friend and/or sell you a dog because I don't want my breeding getting into their hands."  I have friends with other breeds and I like to hang with them if I can.
I've kept to myself until just recently and I've become really close with a couple of gals in Shibas and Marcel and I even joined our local Evergreen Shiba Club.  So we are being more involved with the local Shiba Inu community.  Still, I tell certain people who tend to insinuate someone "might be" talking about me on facebook that it's none of my damned business what people say about me behind my back. I have enough trouble already thank you very much.
Speaking of rats, one rat has sadly lost her life to cancer.  I think it's the damned rat food.  I figure on the animal food scale the rat probably gets the worst of the floor sweepings from the pet food plant.  It looks like saw dust glued together.  So I'm feeding them cat and dog food with lots of left overs from our own kitchen.  It's got to be better for them then that rat food.
I'll try to remember to blog again soon.﻿
Posted by Cherifell at 5:28 AM No comments: