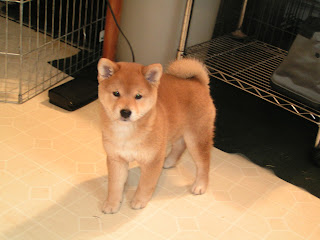 Meet new puppy Ebi.  Marcel had been wanting to name a puppy after my favorite piece of sushi for a few puppies now.  We have themes for litters like those born the day of an earth quake or a holiday or other event or something similar to the parent's names.  If there is nothing I want to associate with I will usually use a favorite song or music genre. We tend to name our pups based on their personalities, like Zoom who never stopped.  Why Marcel wanted to name this one after a shrimp on a little ball of sticky rice I will never know.  But I have to let him have his way some time so Ebi it is!

Today Ebi had a lesson on the grooming table about how good doggies can sit on the table and relax.  This gets them up and out of my way while I do my barn chores. I let Stitchy (the Pom) and Bridget (Shiba) sit on a table across from Ebi to show how proper dogs behave.  They are both angels and would sit up there all day.  The table exercise teaches patience AND teaches baby pups how pulling against a leash doesn't get them where they want to go. So after her little lesson Ebi had a nice bath.  She was really good in the bath tub and particularly liked being dried off with a towel.

I figured with the litters I have still being in the rat stage I should spend more quality time with Ebi.  New born's pass through stages, rat, hamster, guinnea pig, puppy.  This is my age description and the noises they make during the different stages.  Soon Ebi will be a teenager and like her human equivalent she won't want much to do with mom so I need to teach her manners NOW!

We purchased Ebi from another breeder and she will be shown and eventually take the place of LG in my breeding program.  I am breeding another line into my pedigrees.  This opens up to the possibility of using different sires on my females.  Now I can introduced some strong qualities that my own females are lacking in.  I like everything about Ebi but her tight cinnamon bun tail but hey,  no dog is perfect.  Most people do not realize that the preferred tail on the Japanese dogs is a sickle tail and NOT the tight curl.  A loose curl resting to one side is fine too.

Enough lessons today, I have been teaching things all day.
Posted by Cherifell at 1:08 AM No comments:

It's not all fun and games

Being a good breeder means you take excellent care of your dogs and you can make critical decisions when necessary.  Sometimes the decisions are made for you.

One of our puppies born Monday had to be euthanized by Friday.  Total bummer for the Thanksgiving  weekend.  It had a clef palate.  The vet said she was amazed I kept him alive so long and euthanasia was the only solution to the poor baby's problem.  I was draggin' my butt around by then too.  Getting up every two hours to tube feed a puppy is hard on a gal with Fibromyalgia.  People with FM need good hard sleep more than the average healthy person.  So he is gone now and I can sleep but the emotional toll is great too.

Almost everyone wants to raise puppies at some time in their lives.  It sounds like fun (no one ever thinks about all the poop), playing with puppies all day long.   Well, it's darned HARD sometimes.  Hard when one dies before his time.  Hard when you've grown attached to a dog for the last two years while you trained and showed her and a health test doesn't turn out well so you have to spay her and place her as a pet because you can only have so many dogs and you won't have room for your next show and breeding prospect if you keep YET another just as your pet.

People tell me stuff like "oh I couldn't give any of them up, I'd have to keep the whole litter" and "I couldn't raise a service dog puppy because I couldn't give him back" things of that nature.  Personally I think they are being selfish not to let a dog have his own family or not see the greater picture of raising a puppy to be of service AND the special companion to someone less fortunate then themselves.  Animal breeders are not heartless for the most part.  Sometimes we just have to make hard choices that are in the best interest of our animals.
Posted by Cherifell at 12:33 AM No comments:

I am getting so excited about the puppies due at Kawako Shibas!  LG (Little Girl), Lexi AND Bridget were bred and now it's just a matter of waiting.

Of course I am busy getting ready for the deliveries and I hate to say my house will be crowded with ex-pens and whelping beds to separate the mamas.

I think I have only had 3 litters at a time on one other occasion but it was several years ago and I seem to remember saying I would never do that again but like drinking tequila I have to remind myself ever few years that it wasn't a good idea.

I have had two litters at a time many times and in fact, find it most helpful, especially if we are talking Pomeranian litters.  LG usually ends up taking over for the Pom mama because they just can't deal with it.

Granted I have had several females that don't like either the birthing process and/or the thought of cleaning up meaning eating the waste off of a puppy's tummy or bum!   It is well known that spoiled house dogs don't usually make good brood bitches.  Ouch, that's harsh.  But it's true.  When I think back of all the females that have had birthing problems and weren't good mothers all those dogs were my favorite girls at the time.  So I believe that saying.

People say that the dog projects the owners own personality and tendencies and in this instance that is absolutely correct.  I have never been able to bring myself to commit to motherhood.  The whole process seems unpleasant and I can totally understand why some mothers eat their young.  I'm talking canine and other animal species not human of course. I'm a rockin' Aunt but I don't think I would make a good mother.  I mean look at poor Lexi, looking so fat and uncomfortable........... 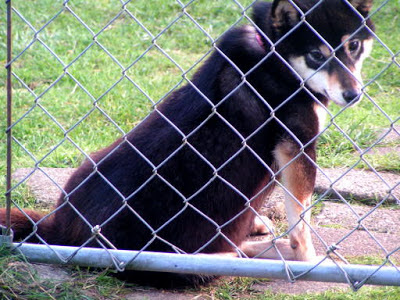 But I fell off subject didn't I?  Anyway.........can't wait to have the bouncing baby puppies!

This time I am doing something completely different when it comes to space and exercise.  Since we built all weather facilities for our horses I am now able to use the entire barn isle way and stalls for indoor puppy play area.  This will greatly lessen my time spent out in the elements which means neither I nor the puppies will be soaked in Washington's non stop winter rain.  Well, we'll give it a try and see how it all works out.  Hopefully it won't snow this winter.

Wish me luck and never stop praying for us, it seems to be working.

Cheri
Posted by Cherifell at 11:44 AM No comments: