OMGosh!  It's been so long!

I can't believe the way time gets away from me.  So much has happened yet so little has changed in the big picture of it all.  I still pick up poop every day.

Georgie, now called Mina, has a wonderful new home with Kellie on Widbey Island.  Hopefully one day I can go up and actually ride her.  That would really be full circle for me.

As my wise friend Tina B. tells me all the time I manage to find the best homes for the animals in my care.  Many rescues have passed through our lives in the time Marcel and I have had a home together. Sometimes I think I make a better intermediary than permanent home for these animals.

But we have our share of keepers from the bunch.  I must tell you about the buckskin we rescued.  I wanted to name him Cruz but it just didn't fit so now I renamed him Mateo and I really like that, it fits him perfectly.  He changed several colors.  He was a smutty dun with dapples for a while and I thought that was really interesting since his winter coat was a very light straw color. Then that fell out and he turned a beautiful golden buckskin.  I still haven't saddled him up yet.  I'm trying to put some more weight on his top line.  Probably have to start working him. It's just too darned hot to force myself or any animal to work.  I'm waiting for it to get a bit cooler.

I wonder about the past lives of the animals we've rescued.  Information is usually pretty sketchy and we end up surmising a lot from their behavior.  Georgie seemed to have that Black Beauty quality about her.  Mateo is a strange one he is.  He's spooky around hands, but then he isn't.  I thought a fly mask would terrify him but it didn't at all.  One thing that's consistent is that someone has been mean to them at some point.

WHY?  Why do people have to be mean to animals?  If you don't like its behavior TRAIN it or get rid of it but don't beat an animal for not knowing what you want it to do.  That is so stupid a reaction I just can't wrap my head around it.  Punishment based training used to be perfectly accepted by people but now we know that everyone learns better with rewards.  Punishment is only given when a person knows what they are expect to do or how they are expected to act but they choose to do the wrong thing.  There isn't a lot of scientific fact that animals, besides humans of course, are intelligent enough to choose.  Popular science thinks animals just react in a normal way for their species.  Try to keep that in mind when your pet decides to disobey.  Try it on and see what it feels like.  Are you more forgiving?  Do you think you should enroll in those obedience classes again?  What goes through your mind?

Posted by Cherifell at 6:13 PM No comments: 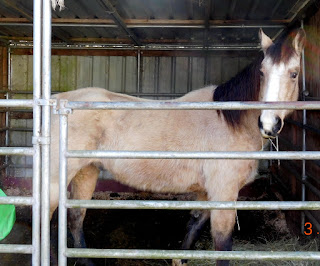 All is going well lately

Gads time flies.  I hope my younger readers really embrace life because it's WAY more fun when you are young with a healthy body and capable of doing all the exciting things that present themselves. 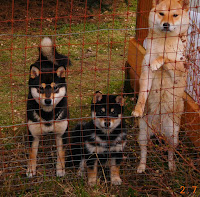 I am fighting against time as they say.  Still I wanna have fun.  In my mind I am still.....oh maybe 30ish?  My mind's eye doesn't see me the way I look in the mirror when I catch a glimpse.  I have a deal with myself not to look in a mirror unless I am fully clothed and it seems to help with my illusion of myself.

Dogs are doing great.  Puppies are growing up.  Darla is a year old and Kazi is finally loosing her cotton ball buns and starting to get her adult coat thank goodness.  Her sister Katniss already won some points toward her championship.  I'm afraid I got 3rd best of the 3 pups in that litter.  Oh well can't pick them right every time. 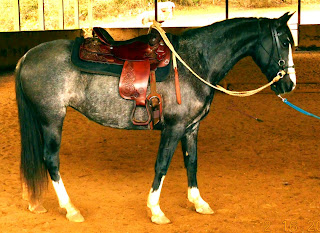 Horses are loosing their winter coats too.  We've had some really warm days.  I think I will attempt to body clip Sterling.  That will be less hair to deal with.  The mare has a blanket on so she won't have such long hair.  I'm still lovin' that mare and boy is she lookin good!  She can't take a bad picture either.  She's incredible.

In fact, I hear one of the horses in the barn banging something around so I'd better go let them out to play. 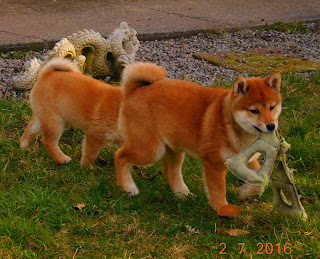 Posted by Cherifell at 12:10 PM No comments:

Wow, it's the 21st of January already.  It's hard not to feel like I'm spinning my wheels and not getting much done.  Guess that's because we (or should I say "I") added Georgie horse to the farm.  What was I thinking you ask?  I'm asking myself too.  The more time I spend with Georgie the more I love her.  I've never owned a horse like her.  Not just her looks and breed but personality.  It's like she understands when I talk to her.  If she's acting scared I just pull her face down to mine and softly tell her what is about to transpire and she calmly lets me do whatever it is without acting stupid like the boy horses who flat out don't care what I ask of them they do what comes naturally.  The mare actually listens!  I've been told that mares "will take care of you" but I never believed it.  Marcel is kinda scared of Georgie.  Or at least he is scared that she will hurt me, trample me or something.  She is tall, well at least her head is attached to a very upright neck whereas the boys have low set necks so their heads are lower.  I think Sterling would outweigh her as he is a big horse too  While he is dog gentle at home he can be explosive in other situations and he has broken things freaking out and pulling back.  Which is a really bad habit.  It starts with them pulling when tied and getting loose.  Just like a Shiba, once they know they can get loose and bolt color them gone!  Assholes I say.
So, I have been limiting my time in the office and spending a lot of time with the dogs and with Georgie.  Marcel's put me on a strict budget so I have to do a lot more work around the farm myself.  I am motivate because I really enjoy doing the work but I have to be realistic.  My fibromyalgia keeps me prisoner.  I used to be so strong and I could work from sun up around the clock once and still deep into the morning before I ended.  Now, I still get a lot done but not like I used to and I end by 7 for sure.  More days than I'd like I'm done by 3.  No dinner on those nights.
All I want to do is play cowboy with dog sidekick. Speaking of dogs,  my last two pups go home this Saturday.  Then I can concentrate on my own dogs.  It's so weird without my little buddy Stitch.  I miss her so much.  She was soooo beautiful inside and out.  Just a beam of sunshine and happiness all the time and I miss that.  Now LG is really showing her age and it won't be long before she is gone I'm sure.  LG is the matriarch of Kawako being great grandma to Friday.
Off to work for me!
Posted by Cherifell at 1:16 PM No comments: